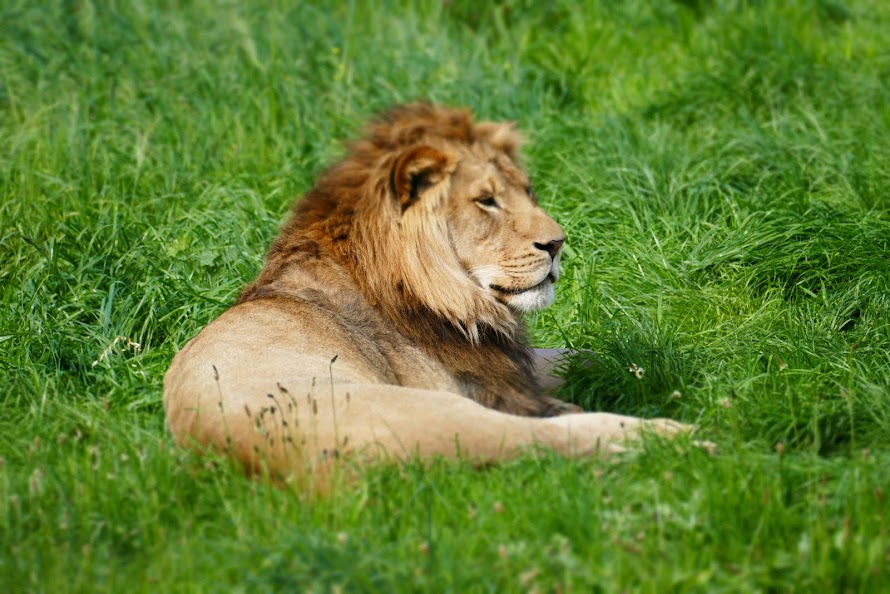 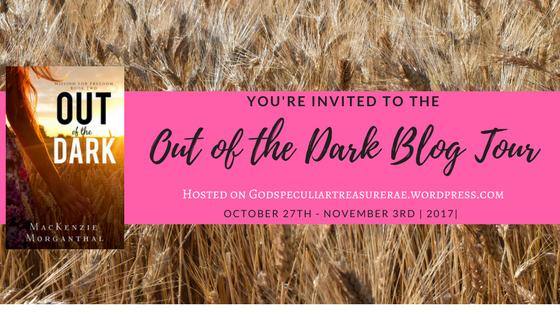 I am super excited to be able to be apart of this blog tour for the release of "Out of the Dark"! MacKenzie Morganthal released her second novel, book two in the Mission for Freedom series, yesterday and I am so thrilled about it!
MacKenzie, a huge CONGRATULATIONS!

Today, here is an interview with the amazing author, MacKenzie Morganthal about her new book, and I hope that you all enjoy it and let us know what you think in the comments below!

Chloe: Hello, MacKenzie! I am honored to be able to be doing this author interview with you!

MacKenzie: Thank you so much for having me, Chloe! It is an honor to be a part of your blog.

Chloe: So, to get started, would you mind telling the readers about yourself, please?

MacKenzie: Sure! I’ve been writing since I was around nine years old, and I enjoy writing anything whether it be song lyrics or (my favorite) novels! Music is also a big part of my life and I enjoy playing the guitar. I love American sign language, choreography, sweet tea and spending hours in coffee shops. But most importantly, I love Jesus and want to give Him glory in everything I do.

Chloe: Wonderful, thank you! I read your first book, Not Abandoned, in just a few hours; it was so gripping! It was a wonderful book and you did such a magnificent job on it. Why don’t you tell a little bit about your first novel, and what inspired you to write it?

MacKenzie: Thank you so much, Chloe. “Not Abandoned”, book one in my Mission for Freedom series, had been a bit of a surprise for me, since when I sat down to write I had no plans to write this story! I had another novel I was prepping for publication at the time, but then I heard a radio interview with a survivor of human trafficking. I think that was the moment where everything changed for me and I knew I wanted to get involved and do something to stop this terrible evil. Using the gift God gave me for writing was that something I could do, and that’s when He gave me the story of “Not Abandoned”. It follows four different girls whose lives are changed drastically when they are affected by human trafficking. My goal for this book has always been to raise awareness about this subject and educate young girls so that they are aware of the dangers and can keep themselves and their friends safe.

Chloe: Amazing...I think everyone should read your book. So, your second novel, Out Of The Dark, which is the second book in your Mission For Freedom series, is releasing the 27th of this month! I am super excited to read it! Would you mind telling us what this one is about? What made you want to make Not Abandoned into a series, or did you have that intention all along?

MacKenzie: I’m excited too! When writing “Not Abandoned”, I actually did not have the intention to make it into a series at first. But by the time it was finished and I had readers begging for a sequel, I began work on a sequel. My plan was to write the sequel and that would be the end of this story. But I got very stuck in the sequel and struggled for the past two years with creating this story. I think this dry season for me was God trying to grab my attention and remind me that He’s my partner in writing, and if I try to go at it without Him, I’m going to fail. So over ten rewrites later, God has blessed me with finishing this second half of the story. I think it was about halfway through “Out of the Dark” that I realized I wanted to make this a three book series. As readers will find out, there’s lots of missing pieces left in the story, (maybe a cliff hanger in the end ;)) and I’m looking forward to wrapping everything up in book three. But I’m getting ahead of myself, haha! I am thrilled to share “Out of the Dark” with my readers and hope it will be as loved as “Not Abandoned” was. In “Out of the Dark” you can expect a lot of deep, emotional scenes. As our characters return in book two, they are still working through this aftermath of surviving human trafficking. So there’s a lot of emotional conversations throughout the book. There’s a lot of suspense and drama. Avery begins receiving death threats, and Haley takes the case into her own hands. Because as we saw in “Not Abandoned”, Haley is a very determined young woman!

Chloe: Oh my! sounds as wonderful as the first! So, you being the creator of your book characters, you know them all best. Who is your favorite character in Not Abandoned and why?

MacKenzie: Hmm, that’s tough because I love them all for different reasons. Haley Hampton, our young cop, has always been a favorite of mine though. She’s brave and bold. And there were some parts of her personality where I could see myself, like how passionate she is about stopping human trafficking, and how she (sometimes) jumps without thinking first. ;) I was really rooting for Avery in “Out of the Dark” though, as her character develops a little more, and I think readers are really going to feel connected to Avery a lot more in this book, and especially into the third book.

Chloe: Oh, I love Avery and Haley! They are two amazing, strong girls! How many new characters come along in Out Of The Dark, that were not in Not Abandoned?

MacKenzie: One of the main new characters that we meet in “Out of the Dark” is Elaine Reynolds. She’s fifteen years old and is being trafficked from home by her older boyfriend. Elaine is very sensitive, and still dealing with a broken heart from her mother’s death. At first she’s not willing to lose her boyfriend, but as the story progresses she comes to a breaking point where she’s not sure she can keep going anymore. We’re also introduced to two eight year old twins who were rescued from a brothel in Thailand, Jocelyn and Morgan. Jocelyn is especially close to Avery and the two have a ‘mother-daughter’ bond. Another new character you will see a lot of is Owen Jenkins. He volunteers at the safehouse run by Avery and has become a very close friend and confidant to her. But is Owen safe to trust or will he turn on Avery? Readers will have to decide for themselves when they read “Out of the Dark”!

Chloe: Ah! Now I'm REALLY, REALLY thrilled about reading it!! Okay, so can you share with us who inspires you the most in life to follow the calling that God has given you?

MacKenzie: If I can go with family, I’ll have to say my Mom and my sister, Bella. They are both strong women who I will always look up to for their bravery and courage and commitment to following God no matter what. My best friend, Raechel, is another great example of that.

Chloe: Great! So to wrap this up with-and on a whole other note then book writing!-is there a movie actress/actor from the 20th century that you are interested in the life they lived or how they effected people, their legacy they left, ect.? (I ask because I’m interested in actresses/actors from the 21st century!)

MacKenzie: Ooh that’s a tough one! Honestly, I’m terrible with remembering names of actresses/actors. :P One of my favorite movies from the 20th century though is probably “Anne of Green Gables”. My sister and I loved those movies! When we were little, we’d pretend all the time that we were ‘Anne and Diana’.  We also grew up watching the tv series “Little House on the Prairie”, and my whole family loved them. J

Chloe: Oh, Anne of Green Gables and Little House!! Love those!
Thank you so much, MacKenzie for letting me be a part of this! You are such a blessing to people and may God Bless you as you continue to serve Him and honor Him with your life!

MacKenzie: Thank you so much for joining my blog tour, Chloe! I’m thankful to know you and be a part of your blog today. J Keep serving God and letting Him use you!

Chloe: Thank you so much! 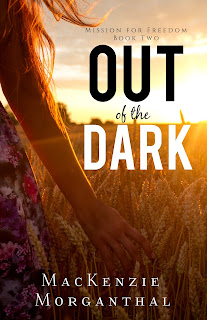 It’s not over yet…

It’s been three years since Haley Hampton rescued her sister, Avery, from a human trafficking ring. They are still struggling through the aftermath as both women desperately long for healing to come. But the emotional wounds are not easily forgotten. And the past is quickly catching up to them. A string of death threats leaves Haley on the hunt for a potential killer. As tensions run high, a single mistake could jeopardize Avery’s life.
Then Haley encounters Elaine, a young teen trapped by human trafficking. Could she be their missing link in the case? Is there anyone they can trust? Haley must rely on God now more than ever if they intend to make it out alive. Will they find a way out of the darkness closing in? Because evil is lurking closer…and determined to win this time. 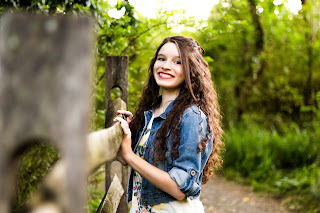 You can keep in touch with her on her social media, links below!

To order a copy of "Out Of The Dark", click the link below or visit her website above!


Also, below is the schedule for this weeks blog tour so you can follow along!


Out of the Dark blog tour schedule:

Thank you all so much and God Bless!! 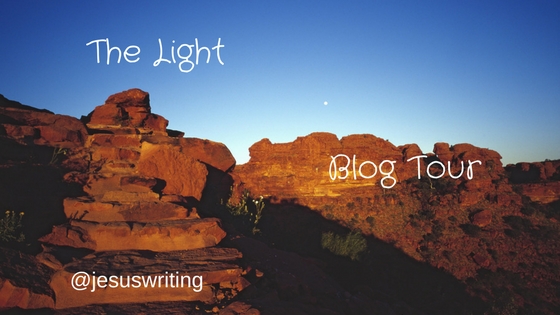 As you probably know, my first published book is being released November 9th of this year! And so to help let people know about it, I'm having a BLOG TOUR!

So if you are a blogger and are interested in participating, then please send me a message through the contact form on the side. →→ Also, if you contact me then make sure to comment and let me know you did (in case my contact form messed up or something!)
When all the dates are filled I will send an email to ya'll who are participating with further information!

The dates that I hope to fill are November 4th through the 9th. I'll be filling up the 9th, myself and the 4th is already filled.
You can do anything you want: author interview, guest post, giveaway, or anything else you can think of that you would like to do on your blog for one of those dates!

And if you don't have a blog and would still like to help, then do whatever you would like to spread the word!

And for those of you who participate in the blog tour, then I would be more then happy to have ya'll guest post on my blog! (And don't forget to tell all your friends about the blog tour! Thank you so much!!)

So let me know as-soon-as-possible if you are interested in being apart of my very first blog tour!

Thank you all and GOD Bless as you serve HIM!!!

Visit MacKenzie Morganthal's website here to read about her second novel, Out Of The Dark to be released October 27th! 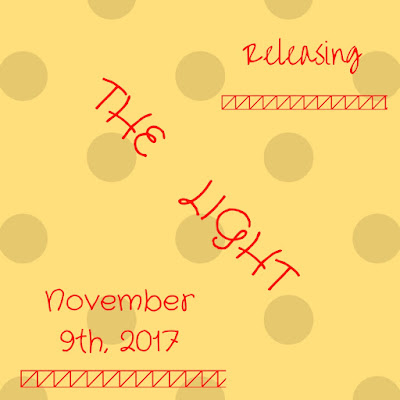 I am so excited to announce that The Light is being releasing...

I am super excited for this to be out and for ya'll to read it!

So, go let all your friends know!

Thank you all for your support and GOD Bless you all!!! 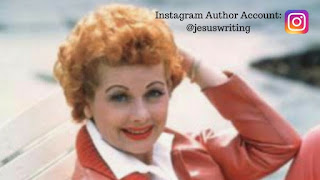 Posted by The Chloe Blog at 2:19 PM No comments:

God helped me publish The Light, so if you would like to learn more about it, or to purchase it, visit the link below: http://givegodtheglory.weebly.com 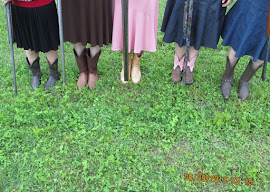